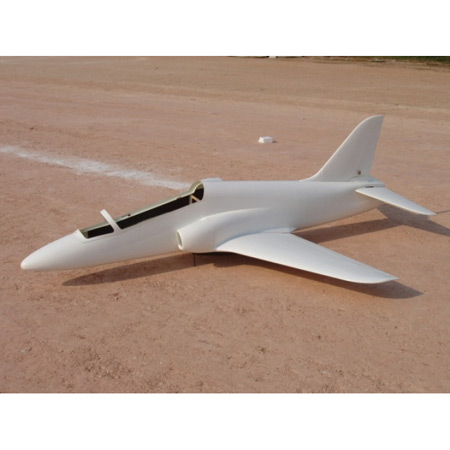 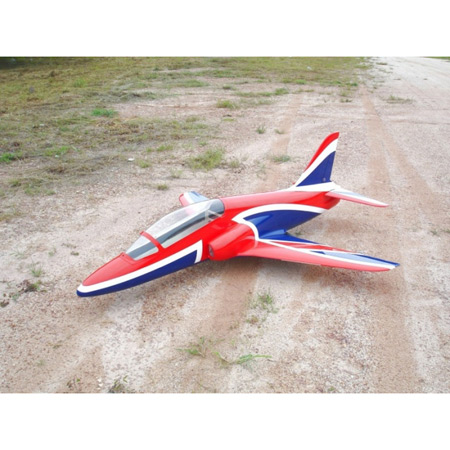 For many reasons it reminds a little bit of some of the classic Hawk schemes, but if you look at it the second time you recognize its powerful lines and shapes. An eyecatcher at the field for sure!

How long have you wished for CARF Models to make one? Well, the wait is over. As the first cooperation with Skygate Collection a BAE Hawk with the perfect dimensions was designed and molded. A few years later the big 1:3.75 version was to follow, but the “small Hawk” as we like to call it, follows a different concept.

It’s not a fully detailed museum scale replica of the full size aircraft. There are other planes on the market with highest scale fidelity, a mistake if we wanted to compete with them. Also there are a lot of cheap Hawks on the market, which don’t fly right, don’t look right and are an engineering disaster. CARF Models wants to stay away from both extremes and bring a right sized BAE Hawk to you with the following features.
Features

The CARF approach at this popular project is giving you the most value for money – guaranteed! We focus on both Sport and Scale. Lets list a few of the advantages of each category and explain how it is built into our Hawk:

Sport:
– easy and fast to build due to highest prefabrication
– breathtaking flying characteristics due to ingenious aerodynamical and structural design
– painted in the molds in many different attractive designs, with even the possibility of real custom schemes.

Scale:
– most impressive appearance on the ground and in the air due to perfect outlines
– panel lines molded in as a great base for further scale detailing
– gear doors and landing gear is in scale position and geometry, so both an economical sport gear or a full scale landing gear can be used.

We wanted our Hawk to be the best flying Hawk out there, suiting the scale perfectionist as well as the sport and performance pilot, requiring only a minimum in building time and skills. We know that you want to fly – not build.

And we wanted our Hawk to be the best and easiest building Hawk out there, too. That means, the engineering of the design had to be bullet proof, it had to incorporate the most complete solutions and it had to be meticulously tested and by several highly active pilots, to show weak points, if any, and allow the fixes before the kit was released. It had to be intelligently prefabricated as much as possible, still giving you some room for customization.

The wing is a masterpiece in itself. The structural wood is really complex, basically due to the fact that the CARF Hawk has the landing gear mounted in the correct angles, so that the scale size wheel will fit at exactly the right position into the wing when retracted. When extended it also needs to be in the scale position. A pair of very effective flaps are skin hinged on the bottom side and ready to go – even the control horns are glued in. The ailerons are also skin hinged on the top surface. Control horns are glued in, servo mounts, too.

The flying stab is one piece with a rectangular spar tube all the way through. It is bolted on to a carbon fiber mount, moving on a pair of ball bearings on a 10mm carbon rod. The control horns are glued in, 1-2 servos (depending on type and personal preference) sit right in front of the stab with shortest possible linkages. A hatch makes stab removal and servo access very easy.

The fuselage is a non sandwich part, to make it rigid for the everyday use and abuse. A nice and strong skin holds a pair of engine mount formers, a front former and a stab former. Also the whole nose gear mount is glued in and ready for the landing gear to drop in. Air intakes are separate parts, to be glued on later. The scale shape of intake lip and the spacer between fuselage and air intake absolutely elevate the CARF Hawk above many others. The fin is removable for transport and storage. The rudder servo is installed in the fin, and the rudder is pin hinged, ready to go with control horn.

The landing gear of a Hawk is not an easy project at all. The wing is quite thin where it mounts, and when it retracts, it swings forward, while pointed slightly backwards when extended. Also the there is a quite noticeable trailing link which only would work if two different kinds of springs were used. The strut must be almost fully compressed when the plane sits on the ground, but must lengthen a lot when the strut retracts, to fit the wheel well. The nose gear retracts forward. It has to retract almost 115 degree so that the wheel disappears completely, which means, the strut almost hits the front edge of the canopy frame. Yes, the room for the nose gear in the fuselage is at least as tight as for the main gear in the wings. Therefore the steering servo is mounted right to the strut. We keep the nose gear door as a single door, but scale freaks can split it and hinge it on both sides. Which then would require an additional air cylinder. A separate “Pneumatic Pack” has been prepared so that all required equipment to install and operate the gear safely and as intended by the designer is available to you. This completion pack again is not cheap, but it has all required cylinders, valves, air lines, quick disconnectors and reservoirs included as a plug and play solution. We highly recommend its use for trouble free installation and operation. We always take a lot of time and great pride in selecting the best and still cost efficient equipment.

The engine installation in the CARF Hawk is very simple. The large access through the fuselage opening when the wing is removed provides a lot of room to work. A carbon duct, mainly for fire safety reason, feeds into a double walled thrust tube. Quite long, therefore with maximum diameter possible. To have enough room for fuel and smoke we did not use an internal intake ducting. All other equipment, both engine accessories and RC components, are mounted on a large RC board in the canopy area. Very easily accessible through the large canopy. With the CARF Hawk the correct center of gravity is easily to achieve, there is no additional weight or any other trick necessary to balance the plane perfectly.

A fuel cell with hopper tank and plumbing material is available as an extra. The instruction manual refers to it and describes its installation. We recommend to use this fuel tank set because it makes good use of the available room in the fuselage and still allows the additional installation of a smoke tank. A Cockpit kit is also available as accessory.

However, we don’t want to miss getting a strict CARF policy clear, too:

What does it help if gear and gear door cylinders are installed from the factory and half of them leak? What does it help if fuel tanks are factory installed and plumbed, if the engine quits during the first flight because of a clunk not being secured properly? We think, that there are definitely some areas of work which the factory shouldn’t touch, if not only 100% professional and experienced builders and flyers are working on it. And honestly, this is not possible in a serial production – not in Thailand, and not in China. So CARF’s concept is that prefabrication ends at a certain limit, and on top of that, you as the owner and pilot must do the last steps to make sure that you’re satisfied with the most crucial installation. Don’t you think so, too?

In our opinion, the CARF-Models BAE Hawk represents the best compromise of all available variants of this famous and beautiful airplane. Have fun!