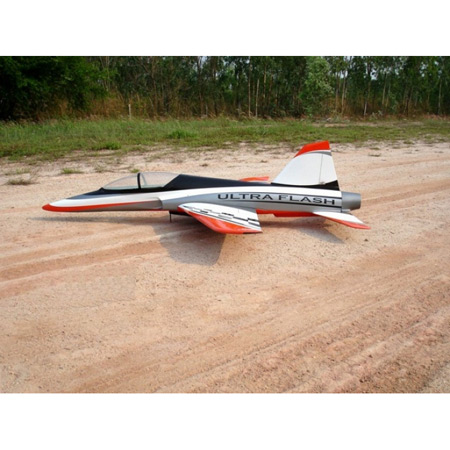 Ultra Flash Chequer Orange Scheme $2,390.00
Back to products
Next product 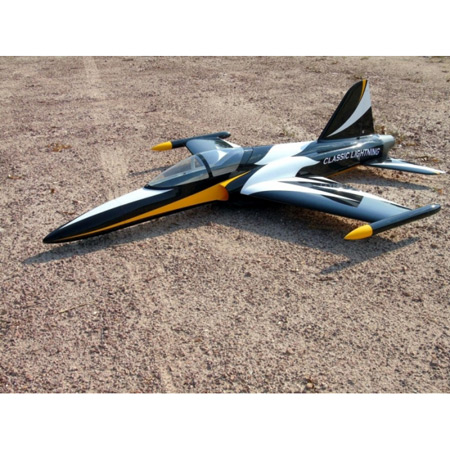 The Black Eagle Scheme is a very aggressive painting, consisting of much black, complementary white and yellow. The white design on the fuselage can recall an Eagle’s head, which is why this name choice came about. From below, bright yellow in contrast to black indicates a bird silhouette.

This painting is definitely an eye-catcher on the ground and in the air!

You might have heard the news. The Classic Flash is back! …Well, not really. Because it’s even better than that.

The Ultra Flash had replaced the Classic Flash a few years ago simply because it was time for a redesign and general improvement in several aspects of this slightly aging model airplane. The “Ultra” redsign had been accepted very well by our customers. However, some constantly nagged that they simply liked the straight wings with the large tip tanks and they said they miss it. Looking at some old classic Flashs and Lightnings flying at jet meets here and there made us thinking, too.

So, we decided to take the Ultra Flash in its current state, with all its improvements over the old “Classic Flash” and fit a set of refined and reinforced “Classic” wings on it. Immediately the look was very familiar. However, we stayed with the swept back “Ultra” tail and this really looked great.

All who love the straight trailing edge and large tiptanks now have their favourite sport jet to go with. We call it “Classic Flash” and we will stick with it. Even though it is better than that….

Anyone who has built an Ultra Flash will find the new Classic Flash a breeze, quick to build and also assemble at the flying site, with only two easily accessible screws required to hold the one piece wing in position. The new Classic Flash can be powered with any turbine from 80 to 140 N thrust. The new JetCat P-100RX and P-140RX are popular choices.

The new Classic Flash fuselage comes from the proven Ultra Flash model. Our experienced manufacturing team produce incredibly strong, yet light structures, reinforced in all the right areas making the Flash series cruise through hundreds of flights without drama. All the hard work is completed in the factory, the wing and tail threaded steel fixing points are bonded in position. This takes all the guess work out of the wing/tail alignment. The Canopy frame is factory trimmed and the fixing system of hooks and a steel pin mean no tools are required and guarantee the canopy will stay put, even in the fastest knife edge passes. With the canopy removed there is easy access to the radio and turbine support equipment.

Turbine installation is simple, with excellent access through the large wing opening. The Classic Flash is supplied with full bye pass ducting and a twin walled tail pipe that has proved itself in more than 1000 Flash models. The split carbon turbine cover allows quick turbine access without the use of tools.

The fuel system allows for all sizes of turbine we expect you to use in the Ultra Flash. The kit includes a 2.2ltr moulded fuel cell and 190cc hopper tank. This tank is moulded to conform to the fuselage shape, maximising fuselage fuel capacity. An additional fuel cell is available that fits in a purpose made hinged opening in the wing centre section. This 1.4ltr tank increases the overall fuel capacity to 3.6ltrs and allows flights over nine minutes with a JetCat P-140RX turbine. The fuel tanks are linked with a single quick connect joiner accessible through the cockpit The Wing and Horizontal Tail are moulded as single piece units, the internal structure features a carbon reinforce rib and spar system that creates an incredibly strong structure that resists twisting and bending. The gear mounts are from a 10mm thick multiply resin laminated plywood that is fixed to load spreading plywood ribs. The new Classic Flash wing has its straight trailing edge back, but he tailplane’s sweep back, reduced anhedral and increased span was taken over from the “Ultra” giving the new Classic Flash near perfect elevator control during fast or slow aerobatic figures.. Fitting or removing the wings takes less than 2 minutes. There is also a pair of saddle tanks (Together aprox. 1.8 liters). You can use them for smoke or additional fuel.

The Wing and Horizontal Tail are moulded as single piece units, the internal structure features a carbon reinforce rib and spar system that creates an incredibly strong structure that resists twisting and bending. The gear mounts are from a 10mm thick multiply resin laminated plywood that is fixed to load spreading plywood ribs. The new Classic Flash wing has its straight trailing edge back, but he tailplane’s sweep back, reduced anhedral and increased span was taken over from the “Ultra” giving the new Classic Flash near perfect elevator control during fast or slow aerobatic figures.

From an effortless short take-off, through smooth flight routines the new Classic Flash installs confidence in any pilot who controls it. The tip tanks have slowed the plane down a little and improved aerodynamics have taken the new Classic Flash to the next level, rock solid when flown slowly, and a racing thoroughbred when the throttle is opened up. The clean and classic lines allow smooth fast aerobatics where she’ tracks like on rails’.

Be the first to review “CARF Classic Flash” Cancel reply