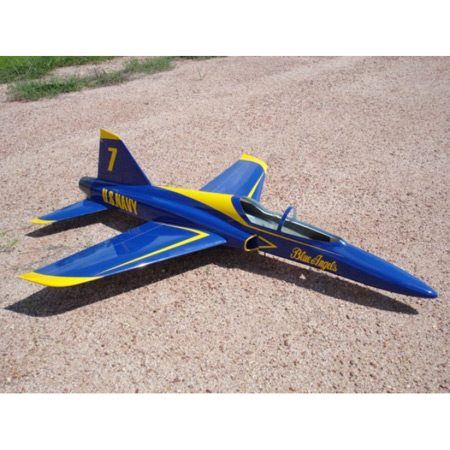 Ultra Flash Blue Angels Scheme $2,520.00
Back to products
Next product 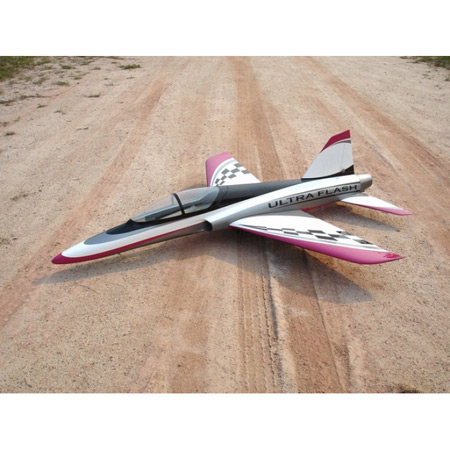 The US Navy Flying School is known for their colorful trainer planes. Admittedly, the colors on this UltraFlash go back to the old days, when they flew Boeing Stearman or Harward AT-6, before and during WW2. But hey, don’t these colors look awesome on this airplane, too? For sure it’s one of the highest visibility schemes on any Sport Jet out there, not only because of the bright yellow and the red stripes on wing and stab, but also because of the high contrast between top and bottom view.

When we updated the original Lightning to the Ultra Lightning featuring a new wing and tail it was obvious to many that we would also do the same to the hugely successful Flash model. The wait was over at JetPower 2010.

The swept back wing with increased span and thinner, curved tips which no longer feature the tip tank, has produced the most amazing flying qualities. With the added benefit of allowing smaller batteries no additional weight has to be used to achieve the required balance point. From the first flight we knew we had produced our best flying sport jet yet. This was confirmed when most of our team pilots had their chance to try the Ultra Flash for the first time. You, too, will experience the same joy as you complete your first landing, so easy, so pure! The Flash had a very wide speed range, but not every pilot was able to unlock this potential, the Ultra Flash has a wider speed range, from very fast to just incredibly slow. The new wing features larger conventional landing flaps without the airbrake section of the classic Flash. These flaps are hugely powerful and allow all pilots to experience walking pace passes and easy short strip landings.

Anyone who has built a Flash will find the Ultra Flash a breeze, quick to build and also assemble at the flying site, with only two easily accessible screws required to hold the one piece wing in position.
The Ultra Flash can be powered with any turbine from 80 to 140 N thrust. The new JetCat P-100RX and P-140RX are popular choices. Any airplane featuring the word Ultra in its name needs to be special, this one takes this to another level completely.

The Ultra Flash fuselage comes from the proven Flash model. Our experienced manufacturing team produce incredibly strong, yet light structures, reinforced in all the right areas making the Flash series cruise through hundreds of flights without drama. All the hard work is completed in the factory, the wing and tail threaded steel fixing points are bonded in position. This takes all the guess work out of the wing/tail alignment. The Canopy frame is factory trimmed and the fixing system of hooks and a steel pin mean no tools are required and guarantee the canopy will stay put, even in the fastest knife edge passes. With the canopy removed there is easy access to the radio and turbine support equipment.

The Wing and Horizontal Tail are moulded as single piece units, the internal structure features a carbon reinforce rib and spar system that creates an incredibly strong structure that resists twisting and bending. The gear mounts are from a 10mm thick multiply resin laminated plywood that is fixed to load spreading plywood ribs. The Ultra Flash wing was swept back, span increased allowing new aerodynamic low drag wing tips that allow walking pace landings. The dihedral angle was optimised for aerobatic manoeuvres including sustained knife edge flight. The Tailplane Anhedral was reduced and span increased over the Flash and this gives near perfect elevator control during fast or slow aerobatic figures.

Turbine installation is simple, with excellent access through the large wing opening. The Ultra Flash is supplied with full bye pass ducting and a twin walled tail pipe that has proved itself in more than 1000 Flash models. The split carbon turbine cover allows quick turbine access without the use of tools.

The fuel system allows for all sizes of turbine we expect you to use in the Ultra Flash. The kit includes a 2.2ltr moulded fuel cell and 190cc hopper tank. This tank is moulded to conform to the fuselage shape, maximising fuselage fuel capacity. An additional fuel cell is available that fits in a purpose made hinged opening in the wing centre section. This 1.4ltr tank increases the overall fuel capacity to 3.6ltrs and allows flights over nine minutes with a JetCat P-140RX turbine. The fuel tanks are linked with a single quick connect joiner accessible through the cockpit opening. Fitting or removing the wings takes less than 2 minutes. There is also a pair of saddle tanks (Together aprox. 1.8 liters). You can use them for smoke or additional fuel.

We think that we have created the most complete sports jet available. From an effortless short take-off, through smooth flight routines the Ultra Flash installs confidence in any pilot who controls it. The increased wing area and improved aerodynamics have taken the Ultra Flash to another level, rock solid when flown slowly, the large flaps make slow flybys a joy, but clean up and open the throttle fully and the Ultra Flash becomes a racing thoroughbred, the clean lines allow smooth fast aerobatics where she’ tracks like on rails’ When it’s time to land, the greatest joy occurs, lower the flaps to the landing position, increase the power to counter the huge drag and fly the Ultra Flash around to your landing site threshold, only chopping the power at the last minute, allows a super gentle touch down and short rollout. The Ultra Flash will give rewarding performance with any turbine from 80-140 N thrust, the strength will also allow the use of the new small light 140 N turbines.