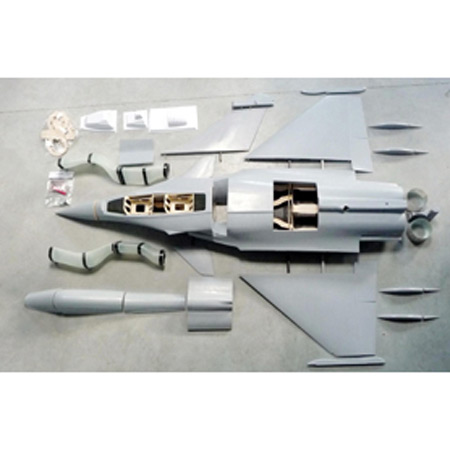 Like most of our fully detailed scale kits, we offer you an all-silver version to be the perfect base for a perfect finish. Just put the colors you want over the silver coating and then beginn to scratch all the edges and pits through the paint, so that the silver base color will appear and give you a perfect illusion of a full-aluminum airframe.

After that, the weathering using airbrush techniques or all the other tricks of scale modelers will turn your airplane into a beauty. We prepared the perfect base for you – the all-silver Spitfire has a fully detailed “museum scale” surface.

General Information‘Gear-up for the Battle of Britain’…

The fog starts to lift.  Within minutes, the 12-cylinder Merlin is breathing fire from its exhausts. Taxi out, last run up, brakes released and off they go.  Wheels up, then a final pass over the airfield, the roar of its exhaust sending chills down the spines of the few watching, now off to the skies over the Channel where danger is lurking.
They disappear from the view of those left behind, waiting, hoping for their return…

The CARF-Models Spitfire Mk IX features a lot of design details which make building and flying enjoyable and successful:

The fuselage is made in total area vacuum sandwich (TAVS), is therefore extremely light. This takes care of the CG problem, which the the old FiberClassics model was known for.

An engine dome is now moulded in, as well as an air cooling channel, so that any 50-80 cc single cylinder can be mounted without huge standoffs or support boxes. Still an inline engine can be mounted after this motordome is cut shorter.

The two-part wing is joined with a high quality alloy tube. It is already mounted and aligned to the fuselage, formers and nuts, holes and bolts are readily installed. A recess to give room for a canister muffler is moulded into the top center of the wing.

The stab is one piece, to save further weight in the tail. It will be slid into a readily milled slot from the back and aligned and glued by the customer. Since it is, typically for a Spitfire, quite small, it is not a huge burden for transport or storage. Elevator and rudder is pin hinged, hinge posts and pin bearings are factory installed.

The cowling got a bit lengthened, so that it matches the Mark IX version, last but not least for one reason: Get the nose longer and ease the CG position even more.
Of course, additional scale accessories such as dummy exhaust stacks, spinner, dummy scale propeller are available, as well as a state-of-the-art CNC-milled landing gear, scale wheels and a light weight tail gear.

The Spitfire’s wings are joined under the fuselage with a 40 mm high quality aluminum tube, and they are attached with 4 bolts to the fuselage. Formers, mounts, nuts and sleeves are factory built in fuselage and wings. Wings and stab are aligned to each other before the kit gets packed in the box. All control surfaces, except the split flaps, are hinged with hinge posts and steel pins. They are factory installed and aligned. It is a very precise and light weight solution. Most control horns and servo mounts are included in the hardware, and will be installed within very short time by the builder. However, the elevator control horn, because it is a tricky geometry, we installed already in the factory for you.

The Spitfire is fitted with a nice, strong motor dome, prepared for the use of a common 60-85 cc engine, we recommend the DA-85.  Fuselage front end and top wing area are designed to mount a canister muffler inline behind the cylinder. We offer a canister set with header for the DA-85, too. Cooling requires a little hole in the front of the cowling, but due to the good air exit this hole can remain very small. If you decide to install a twin inline engine, this is as easy as cutting the motordome to the correct length and gluing a plywood firewall from the inside to the right place. Structually no problem at all. The heavier twin cylinder engine will allow you to place RC components further back in the fuselage, where they might be easier accessible for installation and maintenance.

Many tend to badmouth the Spitfire’s characteristic design features such as the small horizontal stab, the narrow and far back landing gear, as well as the elliptic wing itself… We at CARF have no idea what bad habits they should be responsible for. With the correct airfoil and the correct CG the small stab doesn’t have any negative effect at all. A solid landing gear, slightly cheated in position and angles, makes the groundhandling as easy and safe as with any other warbird, and the elliptic wing itself, we are at loss why this should cause any problems – if the CG is set right

The model has the same flying characteristics as the real thing! Aerobatic manouvers are smooth and flowing, creating an incomparably realistic impression as the CARF Spitfire performs in its element. Military and barrel rolls, huge loops, slow passes with extended flaps, all seemingly effortless. Almost like, the fewer the control inputs, the better she flies! Ground handling is surprisingly good despite the narrow wheel base and non-steering tailwheel, with little tendency to nose over at landing.  As long as the CG is within its limits, the aircraft shows no negative effects from its small stabilizer; its uncritical elliptical wing is nearly stallproof. Once you’ve flown a CARF Spitfire, you’ll know it sets the standard to which other warbirds aspire.

The CARF Models Spitfire has been an old plane, converted into a new project, which lightened the excitement within the whole CARF team. That is because not only the full scale, also the model has a colorful history. It is a great, proven design with breathtaking flying characteristics. Low weight results in low wing loading, thus great slow flight characteristics, easy landing and easy takeoffs.

The CARF Spitfire, a dream airplane, resurrected in our most modern production technology, with proven design features and legendary flight characteristics… many have waited a long time, hoping that we would bring it back – now it is here. Call a rep, get a quote – or just “Buy It Now”!

Be the first to review “CARF – Spitfire All Silver” Cancel reply